Peaceful Valley Property Owner's Association and PWSD#1 Offices CLOSED Labor Day Monday, September 4th.
Posted August 29, 2017
​The PVPOA and PWSD #1 offices will be closed on Monday, September 4th.  The PVPOA office will be open on Tuesday, Wednesday, Friday, and Saturday this week.  After this Saturday, the PVPOA office will return to off-season hours of Monday, Wednesday, and Friday from 9 AM-4 PM. 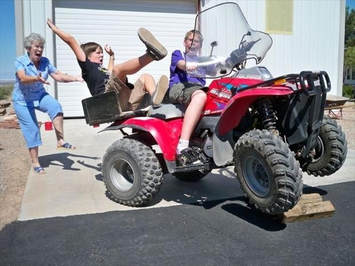 Kids, ATVs, and State Regulations
Updated July 29, 2017
It was just reported of a "near miss" of young children on an ATV running through the  stop sign at the bottom of the hill on Peaceful Valley Road and narrowly avoiding getting rammed by a pick-up truck which had the right of way.  The truck driver followed the kids home at speeds of up to 40 MPH. Neither of the ATV riders were wearing helmets.  A similar near miss happened near the beach.  This time, it was 3 young boys riding a single seat 4X4--one on the seat, one riding on the cargo rack in the back, and one sitting on the handlebars.  None were wearing helmets and they were riding with a group of 2 other ATVs similarly overloaded.  The boys pulled out from the parking lot at the beach from behind a parked pickup truck directly in the path of an oncoming car.  The boys never looked to see if there was oncoming traffic and were completely unaware of how close they had come to being hit as the ATV had no rear view mirrors. If it wasn't for the alertness of the car driver, this could have resulted in a serious accident.  We bring up these vignettes as we've seen quite an uptick with kids driving around the lake on ATVs, usually far in excess of the 20 MPH lake speed limit and none wearing helmets.
​According to the US Consumer Product Safety Council, over the full 5-year period from 2015 through 2019, CPSC staff estimates that there were 524,600 emergency department-treated injuries. An estimated 27 percent of these involved children younger than 16 years of age. Missouri law states that children 15 or under or anyone 16-18 without a valid drivers license must be under adult supervision when operating an ATV.  In addition, children under the age of 18 must wear helmets.  Lastly, the speed limit within Peaceful Valley is 20 MPH and state law is that ATVs cannot exceed 30 MPH on state roads.

If you have an ATV that is regularly used by children under 16, please consider having a governor put on the engine so it cannot exceed these speeds.  To summarize, please make sure the kids are wearing helmets, stop at all the stop signs and look both ways before entering streets, keep speeds under 20 MPH and make sure they are under adult supervision at all times while operating the ATV.  Let's keep PVL a safe place for riders and drivers.  To see a plain language explanation of ATV laws see the link at the Missouri State Highway Patrol.